Despite challenges, global travel and tourism continues to surge 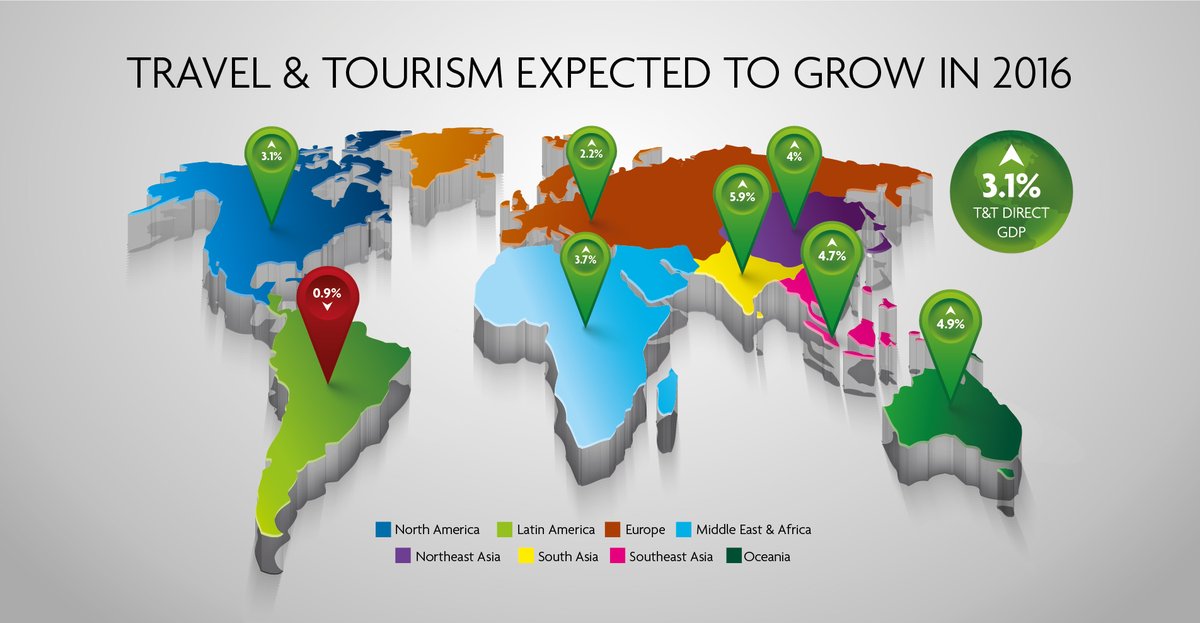 The WTTC’s Economic Impact Reports 2016 underlines that the surge in travel and tourism industry is essentially driven by Asian countries, especially China and India. South Asia leads at 5.9 pc growth, driven by strong economic prospects in India. The report shows that, despite the many challenges Travel & Tourism has faced in the first six months of 2016, the sector is still expected to grow by 3.1 pc, outpacing global economic growth forecast at 2.3 pc. Northeast & Southeast Asia are expected to show solid growth at 4.7 pc and 4 pc respectively, stimulated by a China growing at 6.3 pc.

David Scowsill, President and CEO, WTTC, said, “Our update report highlights the resilience of travellers and the robustness of our sector, as tourism continues to outpace global economic growth by nearly 1 pc. Whilst we should not downplay the impact of incidents or turmoil at individual country level, on a macro-economic level we continue to register strong growth.”

Among the other parts of the world, the Latin America seems to fall behind as the weakest performer, with an anticipated decline of 0.9 pc, driven primarily by the limitations in Brazil.  WTTC reports revealed that the North America will perform well, with forecast growth of 3.1 pc.  Europe will be challenged by lower visitor spend, but will still grow by 2.2 pc.

While the global picture remains positive, the outlook for some countries has deteriorated since WTTC’s last forecast in March 2016. In France, the sector’s direct contribution to GDP is still growing, but the forecast has been reduced from 2.9 pc to 1.1 pc, due to macroeconomic downgrades in other European countries, and compounded by the recent incidents in the country, including the terror attack in Nice.

In Turkey,decline in the share of travel and tourism in the country’s GDP picked up pace, declining by 3.2 pc as against the 0.2 percent decline in the previous report. This pronounced decline is attributed to the numerous terror incidents as well as the failed coup attempt in the country, besides the diplomatic dispute with Russia as well as the proximity to the Syrian conflict.

In Brazil, the sector is still expected to contract, despite the positive effect of the Olympics. Growth has been downgraded from -0.9 pc to -1.6 pc, as a result of the political turmoil and weak macroeconomic performance.

According to the report published by the WTTC, the travel and tourism sector in the United Kingdom might hold up for a while in 2016 with a growth not exceeding 3.6 pc. However, weaker domestic spending and a possible drop in UK outbound travel by 3 pc might see a balance from high spending by international travellers especially Chinese and Indians in the UK due to favourable exchange rates.

“It is important to remember that tourism is a force for good. It brings tremendous social and economic benefits to countries and connects people from different cultures and backgrounds. We call on governments to continue to focus on the economic and social benefits of Travel & Tourism, and to work together with the private sector to combat some of the challenges we face,” Scowsill said.

You may also like
US, UK remain top travellers in world in 2022, says m1ndset report
France to consolidate position as most visited country in world, says GlobalData
Thailand reintroduces Covid-19 restrictions from today
Virgin Atlantic to join SkyTeam airline alliance in 2023
About Post Author