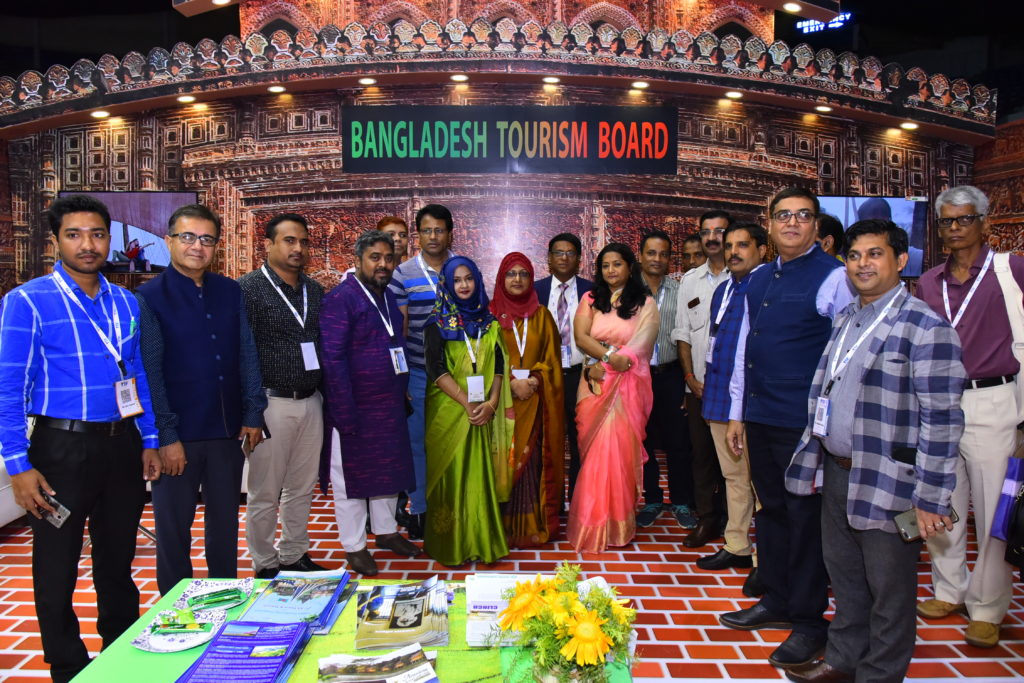 India is becoming a popular destination for Bangladeshi tourists who are flocking to India mainly because of holiday and recreation purposes.

Bangladesh, the closest neighbour of India shares not just the borders from three sides but also the culture, habits, language and cuisine. This might be the reason that India is the top priority country for Bangladeshi tourists as one in every five tourists to India is from Bangladesh.

At the recently concluded TTF Kolkata, a panel discussion titled “How Bangladeshi Tourists Outnumbered European Travellers to India (and Indian Tourists to Bangladesh did as well?)” took place at TTF Forum.

The panel opened with a succinct presentation with facts and figures that established the context by throwing light upon India-Bangladesh tourism ties. The discussion touched upon many relevant areas of concern, prominently addressing the elephant in the room – visa regulation and processing issues. 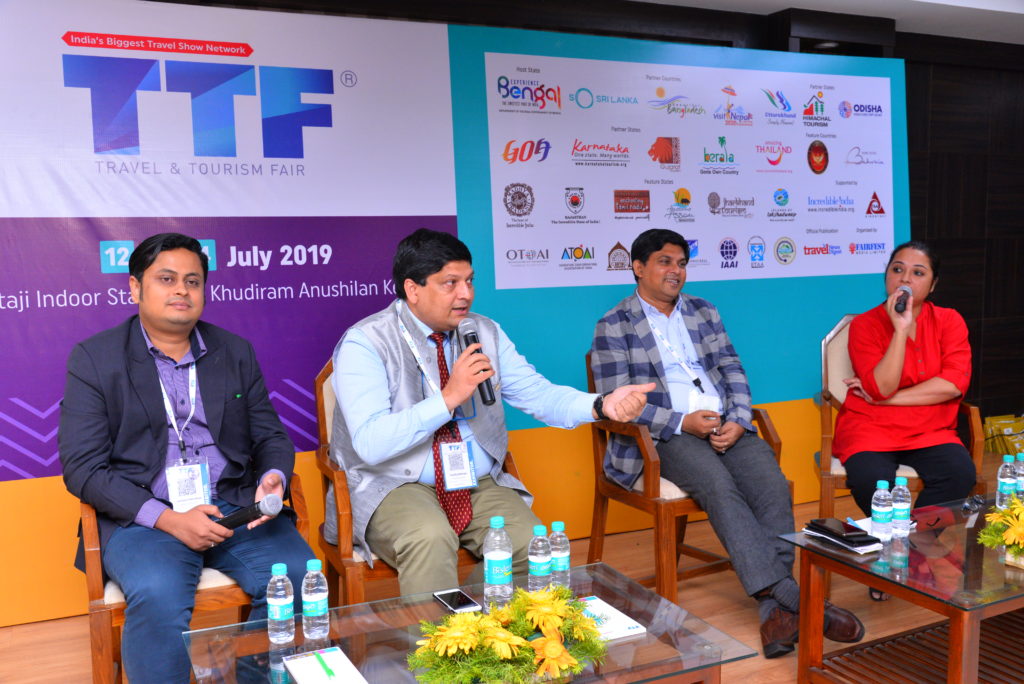 According to India Tourism Statistics 2018 published by the ministry of tourism, in 2017 India received 10.04 million foreign tourists for the first time, where Bangladesh accounted for 21 pc arrivals with 2.16 million tourists.

India and Bangladesh are well connected through rail, road, river and air and have taken further measures to improve it. The most preferred mode of travel for nationals from Bangladesh in 2017 was land (85.6 pc), of which road accounted for 72.9 pc and rail accounted for 12.7 pc, followed by air route 14.4 pc.

However, it is not just India that is seeing a gush of Bangladeshi tourists but the same is true the other way around as Bangladesh receives a majority of its international tourists from India. 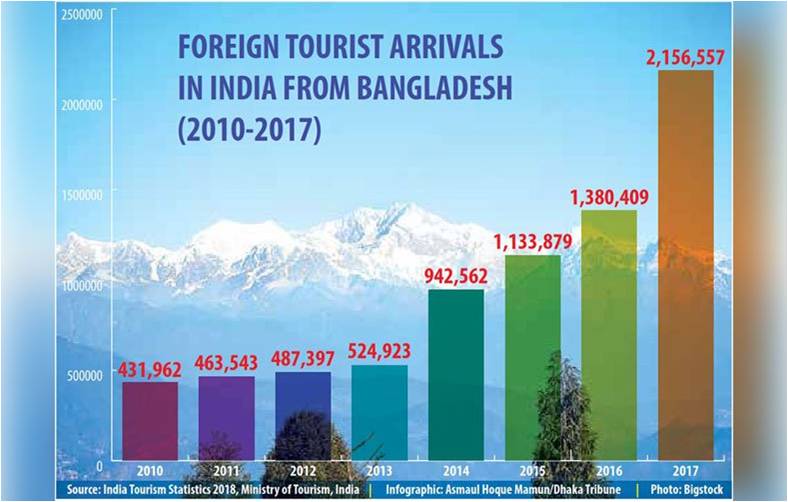 Bengal and Bangladesh have an unspoken bond as they not only share the same language but they also have the same cuisine, culture, festivities and much more.

While speaking to Media India Group, Taufiq Rahman, chief executive, Journey Plus, a leading tour operator company in Bangladesh highlighted the ties between Bangladesh and Bengal. “The people in Bangladesh have a strong bond with Bengal because of the similarity in culture and cuisine. One of the major advantages is the language as we speak the same language.”

Md Mohiuddin Helal, CEO, River and Green Tours spoke about how Bangladesh is planning to target tourists from Bengal. “Bangladesh and India have a long relationship and a lot of similarity with the same mindset and culture and language. Our political relationship is very strong right now. So this is the right time to exchange tourists in both countries. The people from West Bengal are visiting Bangladesh because of the similar festivals and for their roots. We have to come up with a strong campaign and roadshows and how we can give this message to the travellers. The government will have to take more initiative,” he said.

The main focus of Bangladesh at present is only on Bengal said Syed Shafat Uddin Ahmed Tomal, managing director of Market n-Trance Ltd.  “We don’t really have any special packages for the other states of India as we are mostly involved in the tourists coming from West Bengal at this moment. We have a few regular tours like Shakti Peetha (significant shrines and pilgrimage destinations) tour, for the six Shakti Peethas in Bangladesh- we have an itinerary of about 10 of this tour per year, this may attract the religious people,” he said.

“Another tour which again becomes specific for the people of Bengal is to take them back to their native places who had to relocate during partition. And there are the leisure tours. These are the three tours mostly for Indian belt. We work in Mumbai with organisations like Cox & King but they are only MICE tours- and we mostly provide them with hotels and transport help. But Spicejet is going to start a Dhaka-Mumbai direct flight which may help us and we may present new products for the people of Mumbai at next OTM,” added Tomal while talking about the plans for the rest of India.

The deputy secretary of civil aviation and tourism of Bangladesh, Anjana Khan Mojlish while talking to India Outbound said that Bangladesh is planning to highlight the natural beauty in the country to attract tourists. “We are focusing on our natural beauties and archaeological sites our festival items which will attract the tourists more. Bangladesh is a land of natural beauty and there are hundreds of rivers and greenery all over the country. I think the simple livelihood of the people is what attracts people. We want the travellers to see the lives, community of the people of Bangladesh,” she said.

Tour operators in Bangladesh are now focusing on how to target the newly booming sector, that is, the MICE and luxury segment. “Over the last couple of years, Bangladesh got many luxury resorts around the country, especially in Cox’s Bazar which is the tourist capital. So whenever you want to promote a tourist destination you should have proper accommodation where you can accommodate those people. So since the past couple year’s private investors are investing a lot in MICE and in Dhaka, Chittagong, Cox’s Bazar we have our convention centre to attract MICE segments. Bangladesh Tourism is also focusing on this segment as it will be very beneficial for our economy as well. Things have started but we still have a long way to go,” says Taufiq.

According to data reports, about 70 pc of tourists prefer visiting Cox’s Bazar and Chittagong Hill Tracts, followed by Sundarban and Sylhet.

The travel operators from Bangladesh are now planning to tap the other cities in India apart from Bengal. “For how many times can travel only to Kolkata? People are now thinking to enhance their travel experience to other cities as well. Our target is not to ensure how Indian tourists come to Bangladesh or how Bangladesh tourists come to India, but we are also trying to tap the foreign tourists that are travelling to India and how they can extend their trip by visiting Bangladesh since India is the immediate neighbour. Also, if we can prepare a joint itinerary, like the Sundarbans that is there in both the countries and offer a complete package which includes West Bengal and Bangladesh. In that way both the countries will be benefited,” added Taufiq.

You may also like
International Yoga Day 2022: Four unconventional yoga classes around the world
Five best mother-daughter trips to embark on in 2022
Ye Old Trip To Jerusalem: England’s oldest pub
New Skal International Kolkata team gearing to bid for Skal World Congress 2024
About Post Author
Varsha Singh
Varsha Singh, Editorial Director & Product Head, India Outbound: Varsha is an avid writer and traveller who has found the ideal convergence at India Outbound. As Editorial Director, she decides the broad editorial guidelines and issues to be taken up by India Outbound, the magazine, as well as its vast social media assets, including notably the videos. Varsha is leading a compact team of dedicated journalists, multimedia, graphic designers and sales persons, all committed to take India Outbound to new highs.