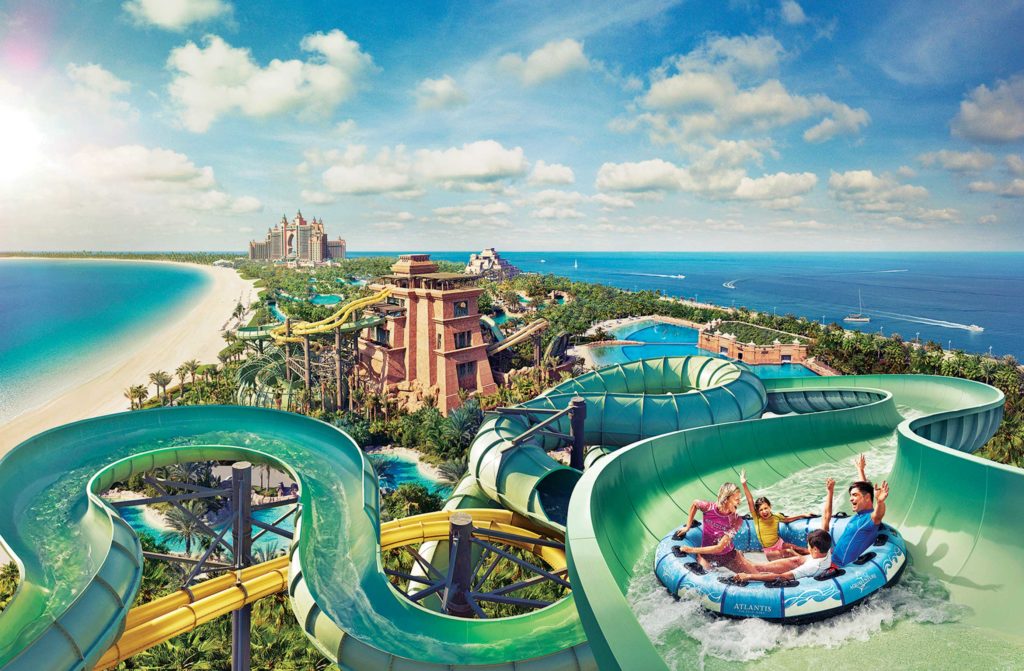 Long known for its souqs and desert safaris, the Gulf nations now also have some of the best adventure theme parks in the world.

You are on a vacation and have found the ideal destination with the most famous and unique theme parks in the world. From stomach churning rides to exhilarating live performances, from ghost-busting, to snapping a selfie with a dinosaur, fighting evil robots to teaming up with the superheroes, the amusement parks in the region will transport you into another world. So where are you? The United States? Europe? No. Move over the stars of yesteryears. The new kid on the block is here. For all those thrill-seekers out there, Middle East, or more precisely the Gulf countries, are the new destination for some of the wildest and biggest amusement parks in the world.

With three theme parks and one water park, a uniquely themed dining and retail destination, and a Polynesian-themed family hotel, Dubai Parks and Resorts is the largest integrated leisure and theme park destination in the region. Promising an unforgettable adventure for all ages, you will be spoilt for choice in this park that offers more than 100 rides and attractions.

Also dubbed as Hollywood in the Desert, Motiongate Dubai is the largest Hollywood-inspired theme park in the region. Experience the animated classics from Shrek to How to Train a Dragon through roller coasters, thrilling rides and more. One can also learn a few dance moves from the Step Up crew.

Live the Bollywood fantasy in the Bollywood Parks Dubai that is packed with action, dance and romance and exhilarating live performances. One should not miss out the region’s first Broadway-style Bollywood musical, Jaan-E-Jigar, at the stunning Rajmahal theatre, along with interactive rides and action-filled experiences.

The ultimate theme park for children, Legoland Dubai offers around 40 Lego-themed rides, shows, and building experiences that the whole family can enjoy. The park has 15,000 miniature Lego models of different landmarks and structures around the world, six themed lands and a mix of indoor and outdoor attractions that you cannot afford to miss. One can also find interactive activities for the kids, where they can earn their drivers’ license, pilot a plane and put out a fire.

Lastly, do not forget to splash into the water park designed specifically for families with young children. Legoland Water Park is the region’s only water park with over 20 Lego-themed water slides and attractions including the wave pool, Duplo toddler play area and build-a-raft river, where you can customise your very own Lego raft.

Be a part of world’s largest indoor theme park 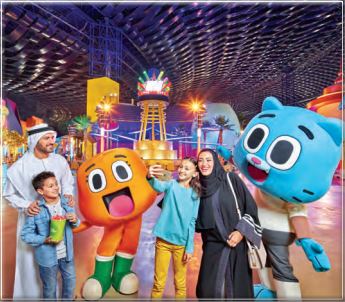 Be a part of world’s largest indoor theme park

Plunge into the realm of superheroes, dinosaurs and ghouls at IMG Worlds of Adventure, the largest indoor theme park in the world. Experience extreme mild to wild rides in the park that is equal to the size of 28 football fields. With more than 20 rides and attractions split across four themed zones – Marvel, Cartoon Network, Lost Valley Dinosaur Adventure and IMG Boulevard, this park will give you a complete adrenaline pumping experience.

Sample some of the thrills of the world of superheroes, including a unique Iron Man simulator allowing you to create a custom figurine with your face behind Iron Man’s mask as a memento. One can also explore the dino-centric Lost Valley, a Jurassic land inhabited by 69 state-of-the-art animatronic dinosaurs. From fighting the evil robot in the Cartoon Network area to a walk through the Haunted Hotel, where live ghosts and zombies, scare the hell out of anyone who dares to check in, this place is absolute bonkers.

Do not forget to hop on the Velociraptor, Dubai’s fastest and tallest rollercoaster for a complete white knuckle experience. This top spin ride will make you travel at a speed of 97 kilometres an hour in three seconds. 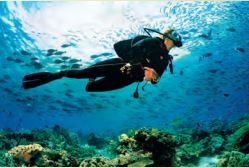 Known for its gorgeous pearls, it was the sea that made Bahrain famous in the beginning. And now the small island nation is again famous for another underwater activity.

Boeing 747, world’s largest eco-friendly underwater theme park in Bahrain is the hot new destination in Middle East. This under water theme park covers an area of 100,000 square metres and has a 70 metre long decommissioned Boeing 747 submerged as its centrepiece, the largest aircraft ever to be submerged.

The site provides an exceptional dive experience as it includes several structures in addition to the aircraft, such as a replica of a traditional Bahraini pearl merchant’s house, artificial coral reefs and other sculptures fabricated from eco-friendly material, all submerged to provide a safe haven for coral reef growth and a habitat for marine life.

The park says it is committed to preserving its marine habitat by incorporating the highest international environmental standards in this underwater project.

Relive your childhood at the Warner Bros World 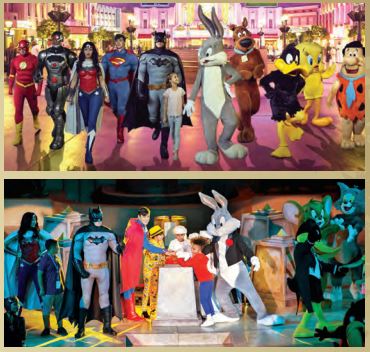 Relive your childhood at the Warner Bros World

Bring your favourite childhood memories back to life at Warner Bros World in Abu Dhabi where television and comic book heroes all live under one roof. From DC superheroes such as Batman, Superman, and Wonder Woman, to much-loved animation characters from Looney Tunes and Hanna-Barbera like Tom and Jerry, Scooby-Doo and The Flintstones, this world-class theme park has brought all of them alive.

The giant indoor amusement park is located on a unique leisure destination, Yas Island,and has a total of 30 rides. They include Batman: Knight Flight, which allows guests to experience flying in a Batwing vehicle. With six expertly designed immersive lands to explore (Gotham City, Metropolis, Cartoon Junction, Bedrock, Dynamite Gulch and Warner Bros Plaza), Warner Bros World is a perfect day out for family and friends.

Walk through the dark alleys of Gotham city into the bright blue skies and feathery white clouds of Cartoon Junction where you find all your favourite childhood buddies, Tom and Jerry, Scooby and the gang, Bugs Bunny and the Loony Tunes come to life.

Sitting right by the famed Jeddah Corniche, the AlShallal amusement park has exciting rides like the thrilling Sling Shot or the double loop roller coaster, skating on the ice arena, or taking a vessel ride around the lake. The park has a section called Snow Land that includes areas to build snowmen, have snowball fights, engage in sledding, a snowy slide ramp and even snow deep enough to wear snowshoes. The park also has an entertainment building called Amazon Ride reflects the Amazon jungle complete with life-size figures of animals, and light and sound effects.

An upscale water park, the Atlantis Aquaventure Parkha’s heart wrenching rides like the epic Leap of Faith, where you slide down a near-vertical acrylic tube into a shark-infested lagoon. Another ride called the Anaconda takes you slithering through a dark and twisting tunnel on the world’s largest diameter raft slide. Even though this park is more geared towards grownups, it has multiple easy slides, and water cannons for kids too. With an Atlantis theme, this park is considered to be Middle East’s number one water park that has its private sandy beaches.

You may also like
Bahrain’s Fast Track to Success
The Rat Race For Mice Travel From India
96 pc travellers want to do nothing on next vacation
Imperial Russian Ballet comes to Bahrain in March
About Post Author
Varsha Singh
Varsha Singh, Editorial Director & Product Head, India Outbound: Varsha is an avid writer and traveller who has found the ideal convergence at India Outbound. As Editorial Director, she decides the broad editorial guidelines and issues to be taken up by India Outbound, the magazine, as well as its vast social media assets, including notably the videos. Varsha is leading a compact team of dedicated journalists, multimedia, graphic designers and sales persons, all committed to take India Outbound to new highs.