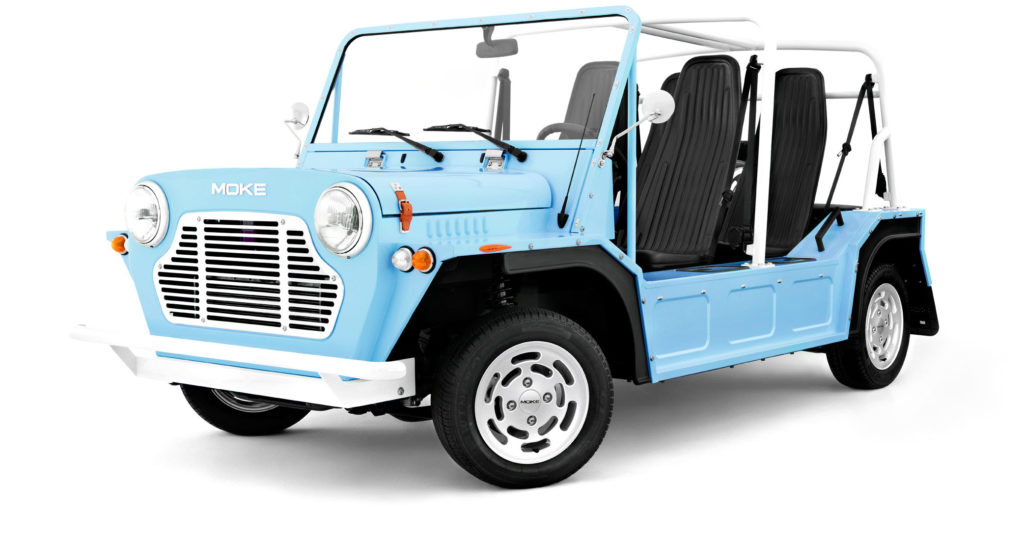 The iconic jeep-like vehicle has been around since the 1960s. The Mini Moke appeared regularly as the village taxi in cult sci-fi series The Prisoner, featured in a number of James Bond movies and famous early owners include George Harrison from The Beatles and actress turned animal rights activist Brigitte Bardot. Moke International, the reputed vehicle producer with signature Mini series, is launching its new hotel-and-resort-friendly electric vehicle at this year’s WTM London.

Robin Kennedy, commercial director for Moke International, explained that the current vehicles are based on the classic design but are upgraded with modern materials and manufacturing techniques, opening up new possibilities. “We’re now re-engineering it as a utility vehicle for luxury hotels,” he said.

The vehicles are engineered in the UK and assembled in France. Around 1,000 will be produced over the next year. The new Cargo Mokes can be used at hotels, resorts and golf courses to transport guests and equipment around the grounds. They are already a familiar sight on numerous Caribbean and Indian Ocean islands and are increasingly visible around Asia and Central America.

Kennedy explained that Mokes will shortly be available in Europe, with the electric version likely to receive the regulatory approvals needed to launch a new car in the European Union. It is also launching a new electric “cargo” version of the Moke, which will be seen for the first time at WTM London.

Its presence at WTM London will, Kennedy says, give it access to potential customers in the hotel and resorts sector. “Large hotels and resorts need to be able to shuttle guests around their grounds and beyond. For our hotel customers, Mokes can be customised to give a branded experience.”

“Hotels can also use Mokes to improve operations by getting staff and equipment around more quickly and efficiently, and with the new electric vehicle, in an environmentally-friendly way as well.”

But with such a strong legacy, Mokes are more than just an efficient utility vehicle, “they are as a way for hotels to differentiate, to offer something a bit more engaging and special.”

Kennedy is also hoping to talk to car hire companies. “In various countries, Mokes are licensed to go on public roads and we’ve always worked closely with car rental firms in holiday destinations. Hotels have the option of accessing Mokes through car hire companies or local distributors. This option means that servicing and maintenance can be taken care of, which is an option for smaller and boutique resorts,” he added.

“We’re excited to be exhibiting at WTM London,” Kennedy said. “because the new electric Moke and new cargo version will be of interest to a global audience and that’s what WTM can deliver.”

Simon Press, the Exhibition Director WTM London added: “Mokes allow hotels and resorts to move staff guests and equipment around efficiently and safely, so the demand is there. It is an instantly recognisable vehicle and we expect it will also inject a bit of retro cool into the event.”