Shades of Sapphire in Mauritius 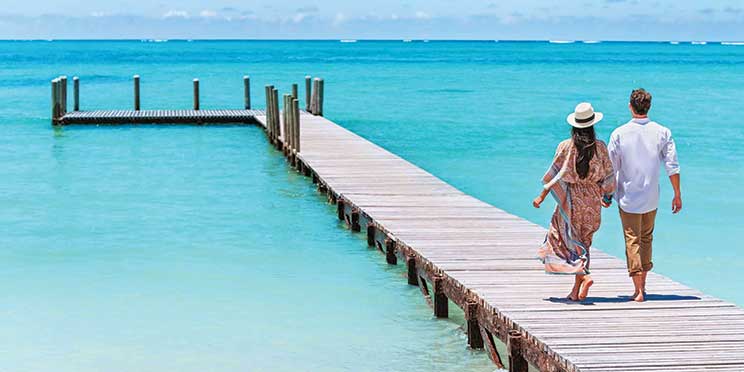 From those who want to laze around on their honeymoon to the ones with a sense of adventure, Mauritius fits every bill. Whether you top it with luxurious or simple experiences, the island will leave you enchanted and in love.

The water is bluer and the reefs more colourful than imagined. The air is the purest one can breathe on the planet and the quietness around can get to your soul. In an environment that is sapphire in hue from the earth uptill the sky, washed green trees stand rather brightly and beautifully, making Mauritius look a bit more like the imagined heaven than just another island paradise. An African island in the Indian Ocean, Mauritius is home to nature and let’s say, just lets the people stay in it as tenants. There are huge rocks all around, a reminder of its volcanic past and there are sugarcane plantations, symbolic of a lazy island life.

The sun rays crack sharply through the clear skies and touch the sand below, lending their warmth to the ground cooled by ocean winds. These pristine environs, clubbed with some world class facilities and activities, make Mauritius a good idea for a honeymoon, closer home.

No bigger in size than Coorg, a quaint district in the south Indian state of Karnataka, it makes exploring all corners of Mauritius possible in one trip. In its North is the island’s major touristic hub with the most number of beaches and with Mauritius’ best nightlife and the South is reigned by sandy coves and hidden falls. The East and West also offer contrasting experiences, a combination of the best of nature and luxury. Every corner has a vibe of its own, giving a chance to the newlyweds to bond over explorations and adventures.

And what’s a honeymoon without some memories for a lifetime. Here is what to buy for yourselves and your family.

In Flic-en-Flac, there are a lot of sea inspired clothing and accessories to get your hands on. The main shopping complex is the Pasadena Village Centre, where there are also some local eateries.

In Port Louis, the capital, the main market (also known as the Port Louis main bazaar) sells everything from apparel, locally crafted goodies, traditional handicraft local jewellery and souvenirs all at affordable prices. It is also where you can get your hands on some Mauritian spices. You can also visit the chic Le Caudan waterfront in Port Louis, which is now a thriving hub of shops, restaurants and bars, full of life all day and practically all night! Symbolic to the marine life of Mauritius, handcrafted, wooden ships are an all time favourite souvenir.

At the Mauritius Glass Gallery, a popular shopping centre, glass artworks are at sale. Tourists can also enjoy watching the traditional glass-blowing process or have a glass model made from an imprint of their hand or foot in sand. 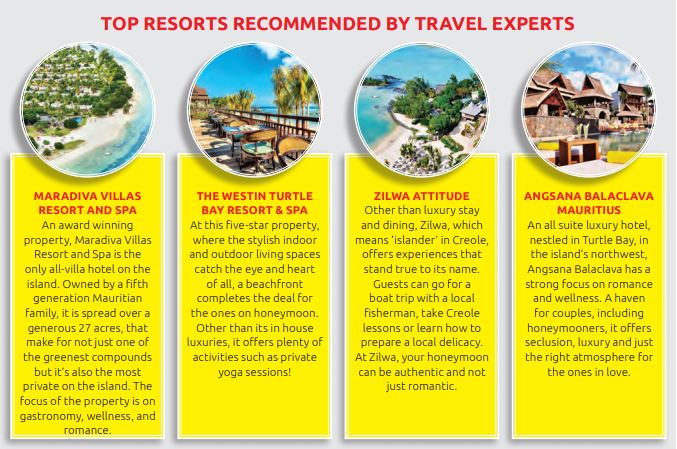 Tamarin Beach: A popular spot for surfing, Tamarin Beach now also attracts tourists for its natural beauty. Situated at the bay of Tamarin, between Flic-en-Flac and the village of Black River, it has one of the most spectacular backdrops in the country.

Rodrigues: A tiny volcanic outcrop surrounded by a massive turquoise lagoon Rodrigues is hailed as ‘Mauritius of 25 years ago’. Unlike mainland Mauritius’ cosmopolitan mix, the island’s population is predominantly African and Creole. A strange yet interesting sight is also that the island is devoid of even a single stalk of sugar cane. The pace of life, too, is slow, thus lending the island with its sobriquet.

Chamarel: Newlyweds, get drunk on the idea of visiting this little town and then getting drunk there! Chamarel is Mauritius’ mountain hamlet known for its bucolic vibes, cool breeze and world-class rum. It is also a break from the coasts and its azure dose. The town is also class apart on the culinary scene and is home to the famous Terres de 7 Couleurs and Rhumerie de Chamarel (the Land of 7 colours & the rum distillery of Chamarel), a colourful mountain hillock. It also the western gateway to Black River Gorges National Park and the Chamarel Waterfall.

From spick and span coastlines to enchanting waterfalls and mesmerising volcanic outcrops, Mauritius has nature in its lap. Its western coast is the most diverse region. While towns like Flic-en-Flac are always alive with the hubbub of tourists, there is a stillness in the air at the Black River (Rivière Noire) and Tamarin, where the mountains form a backdrop. It is on the western coast that tourists can go for some of the most dramatic and rich underwater dives and  then there is the Le Morne Brabant, which offers one of the most photogenic treks. There is also the Black River Gorges National Park and Chamarel, a gem of a town in Mauritius.

So, for honeymooners there is nothing quite like spending time in Mauritius.

A honeymoon of luxury

Like many beach resorts in India, there are hotels in Mauritius, too, that come with a little sandy corner of their own but the kind of activities you can indulge in here are rather unique and with a fancy Mauritian edge.

Other than enjoying water sports such as snorkeling or canoeing, tourists can also take a glass-top submarine ride, to admire the marine life upclose and adding a unique touch to their adventure. Complete with local music in the air, exotic cuisine at the grills, cocktails at the bar, couples can easily lose themselves in the richness of the island.

You may also like
Hideaway Beach Resort & Spa launches online gift programme
5 things to do in Jamaica in 2023
Golf tourism market to grow to USD 40.4 billion by 2033
Busan positions itself as Global MICE Destination
About Post Author

IndiGo to launch daily flights from Hyderabad & Chennai to Gulf