Cook with us the Bunny Chow 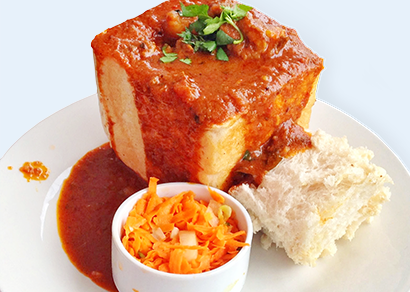 A bowl scarped inside a bread loaf and filled with delicious curry, Bunny Chow is a staple dish of Durban but with Indian origins. Discover its flavours and stories.

In the coastal city of Durban, in South Africa, people like to experiment with their breads and curries. They did once, atleast, and came up with this delightful delicacy which is now a staple food in the third largest city of South Africa. As the story goes, during the great depression all that the Durbanites, especially the Indian labourers, could rely on was cheap curry presented and eaten in a hollow bun. Bunny Chow as it is called, is said to have been invented by the Indians of Durban, more specifically the indentured labour working in the sugarcane fields in and around the city. These labourers neither had the resources to buy good food nor the time to enjoy a proper meal and hence invented this filling, familiar yet quick bite. Some also say it was invented by the victims of the apartheid (a 20th century system of racial separation) as black people were not allowed to enter the same restaurants as white people. The dish was thus invented, following the need to feed and savour some familiar flavours. The good ol’ roti made of wheat was replaced with a bun made of white bread, for it was cheap, and made for a quick serve. Hollowed within, the bun would be stuffed with a curry of meat or beans, which although made in an Indian fashion, lacked the true Indian flavours and spices.

1  Heat oil in a pan and sauté whole spices until they sizzle. Add the bay leaf to this.

3 Stir in the curry powder and sauté for one minute, then mix tomatoes.

5 Boil the meat or beans, ginger, garlic and curry leaves until cooked.

7 Stir in the chopped coriander and lime juice.

8 To serve, spoon into the hollows in the bread and garnish.

• Boneless leg of lamb cut into 1.5cm/½ in dices – 1kg; or red and white kidney beans for vegetarians