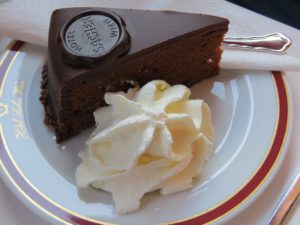 Traditionally served with whipped cream, Sacher Torte is quite a famous cake

On National Sachertorte Day, we look at Vienna’s Sacher Torte, nicknamed the world’s most famous cake, that comes with a long history and still remains a popular must-do for visitors to the Austrian capital.

Cities are often known for buildings, art, symbols that stay through time. For those seeking a local experience, food is also an aspect to be explored, with each city having its own signature delicacy or a version of a dish, to speak of. Vienna is home to several dishes but its Sacher Torte, the chocolate cake, has been nicknamed the world’s most famous cake. Originating in 1832, this legendary cake can still be found in Vienna, in its original recipe at the Hotel Sacher, as well as almost every other bakery in the city.

“Sacher Torte is a historic cake that is always on the list of a tourist when they come to Vienna. The cake, whose ‘original’ recipe remains disputed, and has a history of legal battles, can be tried at two places for those who want to get closest to its original form. There is the Eduard Sacher recipe at Hotel Sacher, which was founded by Sacher’s eldest son, but there is also The Demel Café which some people consider; offers the most authentic recipe for the cake. I do recommend the cake, but, it is important to remember that the cake itself can be a little dry and it is a good idea to have it with whipped cream,” says a tour guide, leading a walking tour through the city.

The cake, which is chocolate in itself with an apricot jam between layers and a chocolate icing on the top is quite appreciated as a speciality in Vienna. Austria also honours this cake with a national Sachertorte Day on December 5 each year. The Hotel Sacher is a luxurious an opulent place to try this cake out where the feel of the imperial and royal Vienna comes alive. At the Demel Café, the old school style of Vienna’s coffeehouses can be experienced, with the bakers in view carrying out their magic.

Beyond the big names

Though there are Hotel Sacher and The Demel Café offering what are considered to be historical recipes of the dessert, there are also several coffeehouses and bakeries where one can try the Sacher Torte in Vienna. Vienna has been known for its coffeehouse culture, with hundreds of such establishments around the city still buzzing with visitors. One can take some time in hand and explore cafes and their Sacher tortes.

Café Central, with a higher amount of the apricot jam in the cake, makes for a delicious version of the iconic cake. The café itself is worth a visit as it once hosted names such as Sigmund Freud and Leon Trotsky in its premises. Dommayer, located close to the Schonbrunn Palace is another nice place to try out a simple version of the Sacher torte. For those looking for an elegant setting, the Hofburg café with the occasional piano filling the air is a different option.

You may also like
European travel retail to benefit from US tourists: ForwardKeys
Fun-filled Feasts with Family in Mauritius
European destinations see strong bounce back in travel
Camping and caravan market to rise 7.6 pc CAGR up to 2030
About Post Author