Piccadilly Circus in London is a must-visit place to experience the diversity of nightlife – from numerous bars and clubs at Soho to a combined experience under one roof at Piccadilly Institute. It’s a place to gorge on food, sip in the drinks and dance the night away!

It’s not without reason that people say London’s nightlife is second to none. So when one decides to leave the confines of the hotel to step into the labyrinth of clubs, bars or discos, the first place on the list is Piccadilly Circus. Known for its nightclubs that always deliver fun and excitement, Piccadilly is considered to be the biggest tourist hotspot and is surely a good night out when in London. The reasons to visit the place are obvious but that night was an altogether a different experience.

As we got closer to the Piccadilly tube station, several groups of zombies with bloody faces, open wounds and torn clothing started cramping the train. And as we came out of the station, we were surrounded by thousands of people wandering around the streets, having fun – they were singing and dancing, dressed in funny costumes – a few of them were dressed as supernatural creatures, while others preferred historical or political figures. We also met pirates, princesses, draculas and cinderellas. And this special night was none other than the famous Halloween night, which added more warmth to the nightlife in London, especially in that cold weather of 5 degrees. 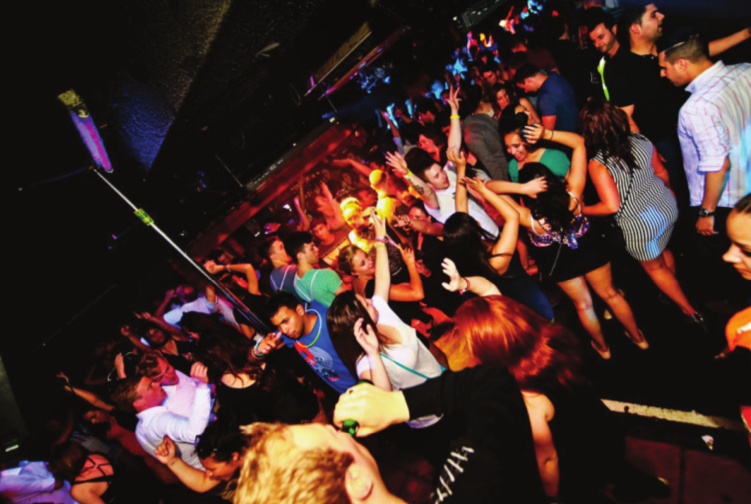 Once the sun goes down, the city comes to life and Piccadilly Circus becomes a must-visit place. Though a busy part of town or perhaps the busiest, Piccadilly Circus has an endless variety of bars and clubs. Come here any night of the week and you will be hard challenged to find any other area in London with such generous happy hours! The bars get packed from 7-8 in the evening and you will find people standing outside with their beer mugs to enjoy the evening. It’s interesting to see the office crowd that comes here to relax and chill after struggling with their work life or you will see groups of young boys and girls who have come to London for studies and of course, a good number of Indians too!

Soho – a perfect night out

Whether you fancy a quality cocktail or a place to party the night away, Soho bars are sure to please you. Most commonly known as the centre of London’s LGBT (lesbian, gay, bisexual and transgender) community – Soho has plenty of diverse and colourful bars, which make this area a popular destination amongst the young at heart. Never quiet, always fun, amazing food, live entertainment and a wide mix of people from different corners of the world, its atmosphere makes it a must for any tourist visiting London.

Every kind of cuisine is represented in the area and the bars are varied and many. From cocktail havens to dance- floor drinks as well as sit-down dining and takeaway, Soho is jam packed with numerous options to choose from. Apart from pubs and restaurants, what else you will find on the streets of Soho? Theaters, music venues, gentleman clubs, cinemas and even a few sex shops and of course some gays!

Piccadilly Institute – dedicated to the principles of pleasure

On Friday and Saturday nights, one will find long queues to enter this place that is known for its unpredictable cocktails and mind-boggling décor. It’s the famous nightclub Piccadilly Institute. Just pay the entry fee of GBP 10 (INR 954) and you will be in the world of entertainment! Of course, one has to pay for drinks inside! There is something for every mood, every scene, every desire, a labyrinth of rooms with six different bar experiences and each is totally unique, named as Noir, Fruit Box, Chamber, Decadia, Clinic and Shrink.

Each room has a different décor – some have a theme of psychiatric room, some have old vibes and some have a tranquil indoor garden. Interestingly, music also varies room by room and includes R&B (rhythm & blues) in Noir, old-school hip-hop in Chamber, 90s music in Decadia, funky house in Clinic, and Motown in Shrink. 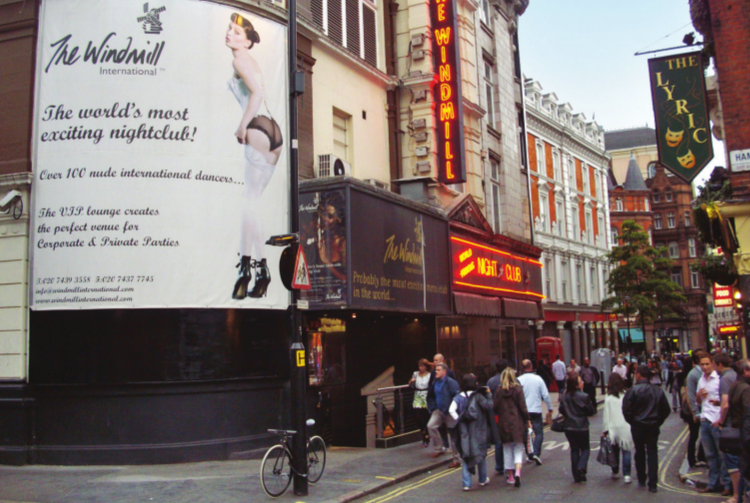 When the sun starts to go down, people flock to The Windmill, an iconic strip club of Piccadilly

The Windmill – a legendary strip club

Unlike Las Vegas, people don’t usually associate London with strip clubs. But just like any great city, London definitely isn’t lagging behind. Piccadilly Circus is famous for its private table nightlife clubs, where people are gorgeous, drinks are delicious, dance floor is in mayhem and if you book a table, you are in for a special treat. Entertaining people for over 80 years now, the Windmill in Piccadilly Circus is the perfect place for sensual strip shows.

This strip club has never shut down, not even during the world war two. Many great comedians began their careers from the Windmill club, such as Tony Hancock, Peter Sellers and Michael Bentine. It has a different theme every night of the week. Though it has modern décor, it has managed to preserve the heritage.

The Windmill is a big club with 40 or more girls during a night and is famous for its stage that has a big pole and a staircase, adding drama to the entire scene. But it is very difficult to get access to this strip club because of its ever increasing popularity that keeps it jam-packed always. It remains opened until 5 in the morning.

A late night feed in Chinatown

Late meals can often mean last orders at 10 ‘o’clock. Maybe some good restaurants will still feed you at 11.30 in the night. The real test begins when you try to get a meal at midnight (may be after the booze!) and for this you end up with one nice option at Piccadilly Circus – Chinatown.

For anyone wanting a decent meal, there are several options. Famous for ducks’ tongues and ‘Hot Pot’ menu, Jen was opened in 1998 and it is available until 3am. Another restaurant is the Royal Dragon, which is famous for good dim sum. And HK Diner is a new and bright place, which has a Chinese milk- shake machine that makes special fruity drinks. And there are as many food options in this Chinese lane as the bars in the gay street of Soho.

When we boarded the bus at 0400 hours (completely safe), crossing the streets of the city, we realised that this night has given us special memories to cherish for a lifetime. But, Piccadilly Circus has a lot more that one can explore only when one is actually here for that perfect night out.