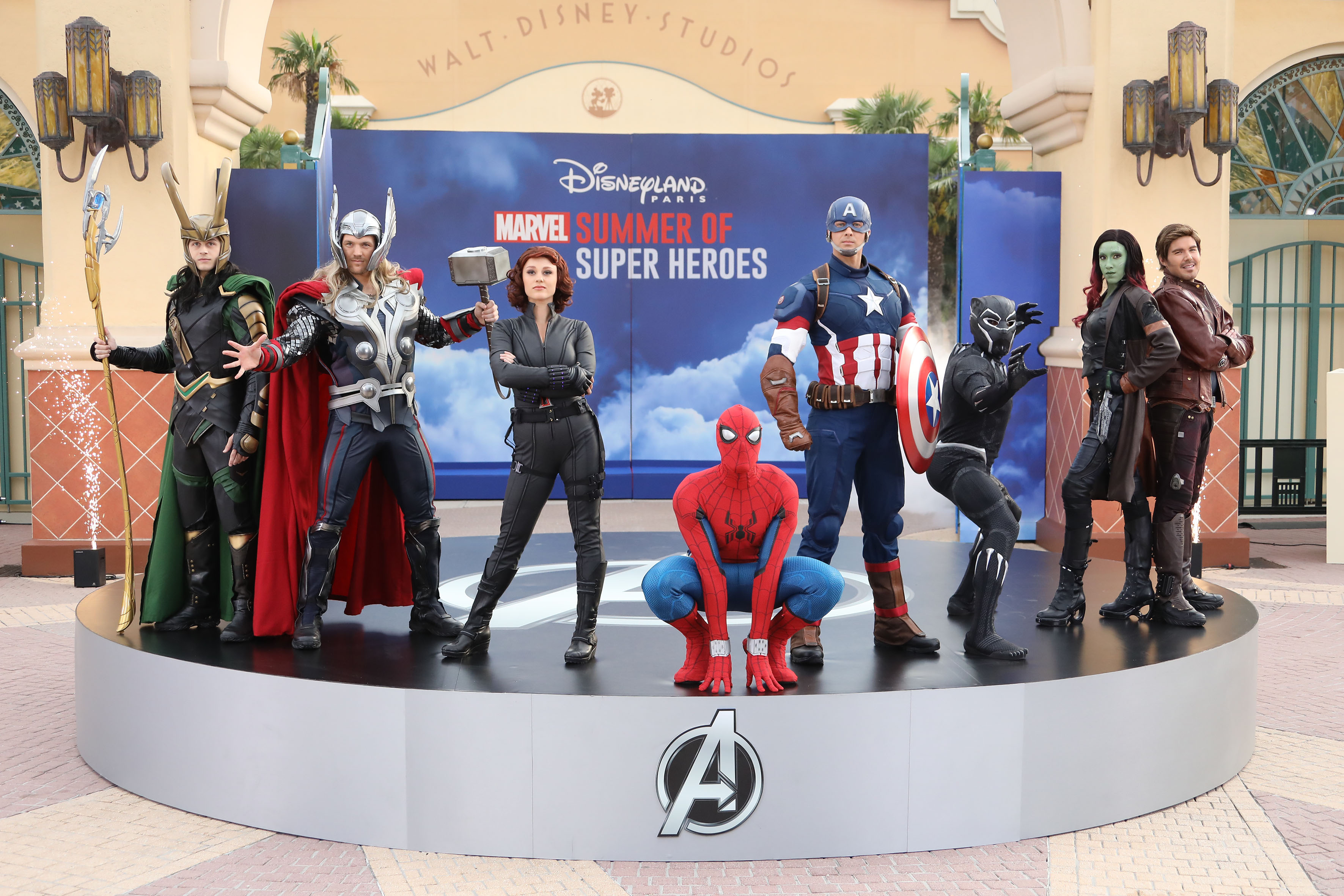 In a bid to attract more tourists and stay ahead of competition, Disneyland Paris has unveiled a new show ‘‘Marvel: Super Heroes United’’. The special spectacle will be staged at Walt Disney Studios Park, Paris from June 10 to September 30.

Thrills are never too far away in an entertainment park, especially one like Disneyland. But even for regulars at Disneyland Paris, Saturday evening was a special one. For they, along with over 150 leading media and tourism influencers from around the world, witnessed a spectacle with leading superheroes – Captain America, Iron Man, Spider Man, Thor, Black Widow, Star Lord and Gamora – rappelling down from a helicopter, making a grand entry amongst the thousands of spectators, especially children who screamed for joy.

‘‘This is the first time ever that we have all Marvel Superheroes united and we are extremely happy to inaugurate this at Disneyland Paris,’’said Catherine Powel, president of the Disneyland Paris Parks and Resort.

The opening of the summer show was organised a few weeks after the release of the latest Superheroes franchise film, Avengers: Infinity War, that shatterred the box office records around the world and even in India. This was the first Hollywood film to rake in over 200 crore rupees in box offices in India and making India one of the top five markets for the film. ‘‘The Marvel stories and superheroes attract all ages from a 5 year old to a 75 year old. It is cutting across genders, boundaries and age-groups. The movies have certainly created a buzz and the show comes at a timely moment!’’said Ryan Gallego, Senior Project Manager at Marvel Themed Entertainment for Walt Disney Parks and Resorts.

The 20 minutes show at the Walt Disney Studios’ theatre did not disappoint the action lovers. Every character had its moment of glory where they could demonstrate their superpowers.

The entire show revolves around ‘unity’ and fans cheer as they join hands to fight together against the enemy.

‘‘It’s almost like you watching a movie but here the characters are real and the special effects are making it feel that we have really entered their world! I am very fortunate to be here to witness the premiere!’’ says Nitibha Kaul, ex-Big boss participant-turned-lifestyle and travel influencer, who along with Media India Group, a media group based in Paris and in India, were the only two Indian influencers and media present at the the grand opening.

The entire area around the Grand Theatre has been decorated with giant statues of Incredible Hulk, Black Panther & Iron Man. To make the experience more interactive, two stages have been added for live, open air performances. The spectacle has been made even more thrilling by Stark’s revolutionary invention, an ‘Arc Reactor’ that generates green energy and a stage that offers dancing sessions with the Guardians of the Galaxy.

With over 320 million visits since its creation in 1992, Disneyland Paris is Europe’s leading tourist destination.

It boasts two spectacular theme parks (Disneyland Park and Walt Disney Studios Park) and seven themed Disney hotels. ‘‘It was quite surprising and exciting to see so many Indians in the park as compared to about just three years ago when I first visited Disneyland Paris with my family,’’ adds Kaul. Indians, besides Chinese tourists, are a key focus of several French and Parisian tourism players, with a healthy double digit growth in arrivals from India for over a decade now.

‘‘For any Indian family visiting Paris or Europe, Disneyland is a mandatory stop over. The experience is unlike any other park, and the new marvel show and themed attractions will certainly attract more Indians as we have millions of Marvel fans and it keeps growing,’’ said Amit Kishore, Co-founder of Think Strawberries, a representation company in India that promotes Disneyland Paris in India.

Disneyland Paris is celebrating its 25th anniversary this year, the Marvel show comes as part of a greater project of extending the Walt Disney Studio Park.

The show at the grand theatre is a seasonal event, but the Marvel universe is meant to stay at Disney. ‘‘We will have soon a unique roller coaster attraction related to Marvel and our current New York Hotel that welcomes Park visitors will also be renovated to become the first Marvel Hotel in the world that  showcases the world of the Avengers, Spiderman and other superheroes. We are very exited about the project and we hope that it will start rolling out in 2021,’’ said Christi Erwin-Donnan, Communication Director at Disneyland Paris.

You may also like
Disneyland Paris unveils Marvel Avengers Campus
Maldives Tourism campaign bags award for Think Strawberries
Fairy tale weddings in world’s most romantic city
Destination Disneyland
About Post Author
Christine Nayagam
Dr Christine Nayagam is a digital and media entrepreneur. She looks after India Outbound overall strategy. She grew up and lived in many countries around the world and writes in both English and French. She is notably the author of two published books on South Asia. As a passionate traveller she regularly blogs about her experiences too.