Cook with us the ‘Kuku Paka’ 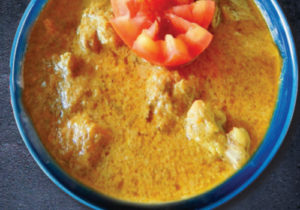 This might come as a surprise, but many African delicacies originated in India. Their ties date back to the Chola period, when the two continents began trading ivory, millet, coconut, and spices. Over time, the port city of Mombasa became a melting pot of cultural influences, with Gujarati, Goan, Konkani,and Punjabi settlers filtering in.

This melange yielded many culinary gems, among the shiniest of which is kuku paka, a chicken curry that takes pride of place on the African table. Kuku in Swahili and other African languages refers to chicken. Paka in Punjabi means delicious.

The basic recipe is simple: grilled chicken meets a lovingly simmered spicy coconut curry, giving the dish its creamy texture and subtle flavour. To this, you can add your own twists, just like the Africans have over the centuries: pep it up with chillies, make the sauce soupier, or toss in some vinegar for more tang. There’s no one true version of the dish, but one thing is for sure—it is irresistible in any avatar.

Marination: Cut the chicken into bite-size pieces. Slash the chicken in places to let the seasoning penetrate. Make a paste of tomatoes, onions, ginger, garlic, chillies, salt, cumin,and coriander. In a mixing bowl, smear the chicken thoroughly with the marinade, reserving some of the paste for later. Keep the chicken aside for at least one hour or overnight.

Making the sauce: Prepare a charcoal grill. While the grill is heating up, in a large pan, heat the cooking oil. Add the remaining paste and cook for about 15 minutes on medium heat until the oil floats up to the surface and the raw smell goes away. Increase the heat and add the coconut milk, stirring vigorously (or the milk will split). Simmer the gravy for 20 minutes or until it is thick and light orange in colour.

Grilling: Grill the marinated chicken until it is cooked thoroughly and turns brown. Add the chicken to the coconut sauce. If the gravy is too concentrated, pour a cup of water and simmer until the curry reaches the desired consistency. Serve hot with roti or over rice.