Through the Canals of Giethoorn Village 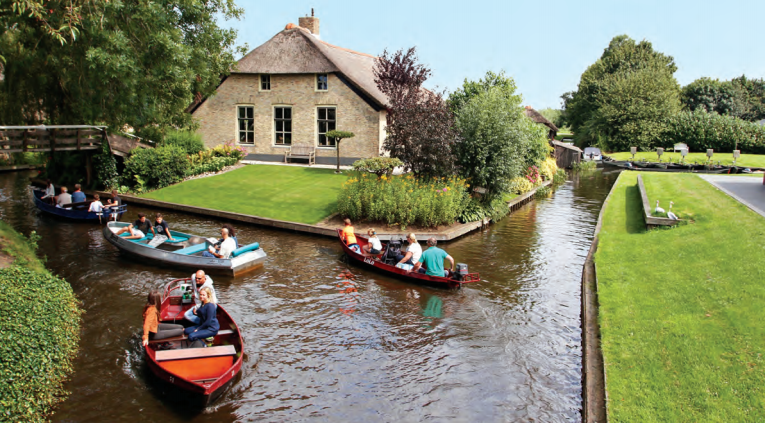 It is not by chance that the Giethoorn Village in central Netherlands came to be known as the ‘Venice of the North’ as there is nary a road to be found in this small town, instead, over four miles of water channel runs through this settlement.

“As we started sailing to enter the village, rowing along with us was a mail-boat. How often do you see a postman delivering letters on a boat? It was captivating. The best way to enjoy the place is to chill and admire the canals,” says Aakash Sethi, an Indian origin high school student in France, who visited the village with his family.

Rewind to the 13th century when the Franciscan monks first settled in the village. Back then, Giethoorn was part of a nature reserve. It was established as a community for peat harvesters, with canals dug for transporting peat, which created little ponds and lakes in the area. Gradually, people started building houses between them with only traditional boats as a medium of transport.

Cut to today – little has changed in Giethoorn. Situated approximately 90 kms from Amsterdam, with waterways that are only one metre deep, the only means of transportation through the canals is via a canoe, or whisper kayak, which is aptly named after its silent engine.

Contrary to most Dutch geographies, Giethoorn in the north-western province Overijssel, has no streets, but only some narrow walking paths and bike trails. Today, the place is a popular offbeat escape, also made famous by its serenity – with the chirping of birds being the loudest noise in the area, owing to the lack of cars.

However, with time, hundreds of wooden bridges now line these waterways connecting the homes in the area with the few narrow streets in the village, which are filled with art galleries and souvenir shops. “You can either take an organised boat tour or rent your own boat to sail beneath these bridges. The village now does have some sidewalks that make it easy to roam around by foot,” says Sethi.

Sailing through the water, you will come across many farmhouses belonging to the 18th and 19th-century, and traditional canal-side houses with arched roofs covered in colourful flowers.

Several restaurants and cafes sit nestled on the sides of these waterways – enjoy a meal inside your boat or hop off to indulge in local cuisine. One of the highlights is the Grand Cafe Fanfare open terrace. The place is named after the famous comedy film Fanfare, filmed in Giethoorn, which initially made Giethoorn a well-known place.

Cyclists, oarsmen and pedestrians dominate public spaces in Giethoorn. Besides canoeing, people here prefer to walk or commute via bicycles, which is also an ideal way to experience the city at your own pace. Most accommodations offer bicycle rentals for those who want to explore the Dutch countryside to experience the village life and come across endless fields and farm animals.

“For people who want something different, there are options to rent an inflatable ball that you can climb inside and walk on the water paths,” exclaims Sethi. 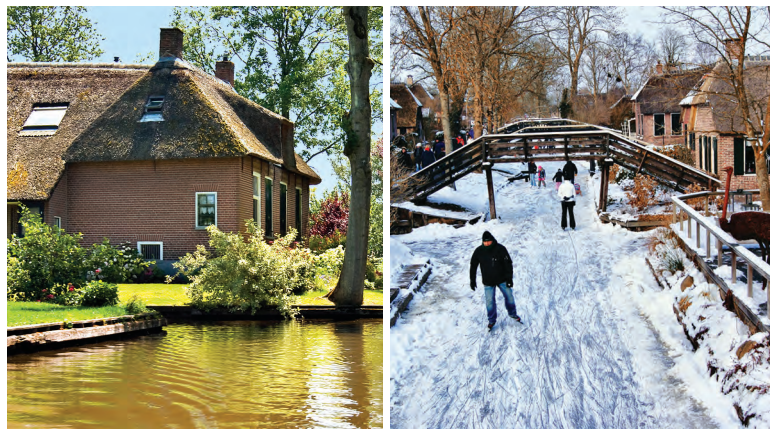 From left to right: Traditional cottages; Waterways during winter months become an attraction for skaters

However, to indulge in the history of the place, its many museums are the best option. Besides many historic buildings, castles and churches, the village also hosts various assemblages where people can witness representations and learn about life and work in the area in the last 100 years, pottery works, vintage cars, bikes and sleds. The ‘Het Olde Maat Uus’ museum is one place worth visiting to experience how a typical farmhouse looked like centuries ago.

Another such attraction to explore ancient gems, minerals, and fossils is ‘De Oude Aarde’, that houses antiquated stones belonging to 1969. One of the highlights at the museum is the world’s largest egg, as well as a store where people can browse through jewellery and decorative pieces.

Under the ice sheet

Shedding its rustic charm, Giethoorn wraps a snow layer around itself in the winter months, opening options for ice-skating on the canals. The village is a popular winter holiday destination among ice skating enthusiasts.

From afar, the place seems to be just another town with roads as the frozen waterways make it possible for the residents to commute via foot.

Additionally, irrespective of the weather, staying at Giethoorn has become comfortable with various waterfront hotels and accommodations that are available throughout the village. Accommodations range from camping grounds and rental cabins to bread and breakfasts and other hotels. The most popular of them being Hotel De Harmoni situated along the canal. All of the rooms offer views of the water with an option to sit out on the waterside terrace, indulge in regional plates like fried eel in the hotel’s restaurant, or rent out boats or bicycles to discover the area.

Another delight is De Lindenhof with its extensive fresh seafood selections, like lobster and salmon, as well as various meat dishes. Many of the flowers, herbs, and vegetables used to cook at De Lindenh of come from its own garden.

You may also like
5 things to do in Jamaica in 2023
Picturesque Pedalling for Pleasure
European travel retail to benefit from US tourists: ForwardKeys
Fun-filled Feasts with Family in Mauritius
About Post Author