Cities with a Colour Character 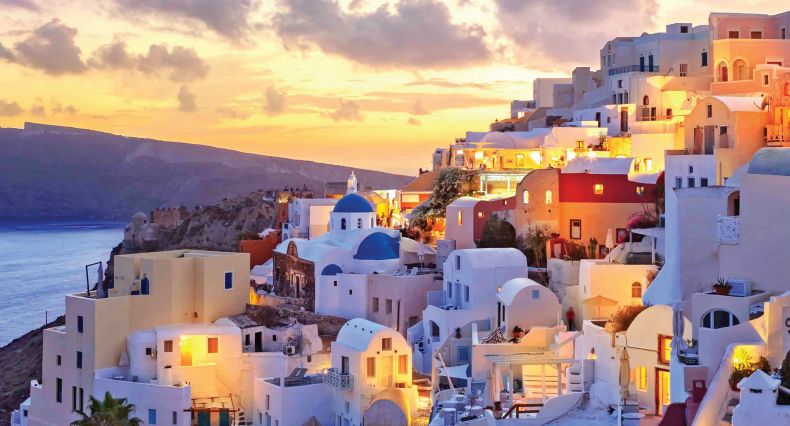 Many Indians probably know Jaipur as the Pink City and Jodhpur the Blue City, but few may know about the generous sprinkling of similarly colourful cities around the world.

I think the kind of landscape that you grew up in, it lives with you. I don’t think it’s true of people who’ve grown up in cities so much; you may love a building, but I don’t think that you can love it in the way that you love a tree or a river or the colour of the earth; it’s a different kind of love,” writes the noted Indian author, Arundhati Roy in her recollections associated with colours. On the next escape overseas, undertake an exploration to find cities around the world that have showcased hues in different forms and structures often serving as remembrance for many. 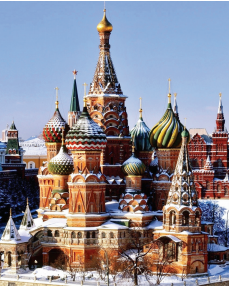 The Red Square is an enlivened city square in Moscow, Russia. The square’s name, although, has nothing to do with communism or any other political movement, yet the red shade found in the structures makes it a must-visit for quintessential travellers. Indeed, it gets from the word krasnaya, which once signified ‘excellent’, and has just come to signify ‘red’ in contemporary Russian. ‘Krasnaya’ turned into its official name during the seventeenth century.

Earlier, the Red Square was known as the ‘Trinity Square’ after the old Trinity Church, which was the ancestor of St. Basil’s Cathedral. It was also regularly called the ‘Flame Square’, mirroring how the medieval Moscow was burned so many times.

Popularised during the twentieth century as the site of impressive military parades, the Red Square showed to the world the might of the Soviet Union and now Russia. Mostly known for cultural shows such as concerts, fashion shows and art festivals, the city’s magnificent design and mystical air give a false representation of the square’s cruel history. However, the blend makes Red Square an interesting spot to visit. 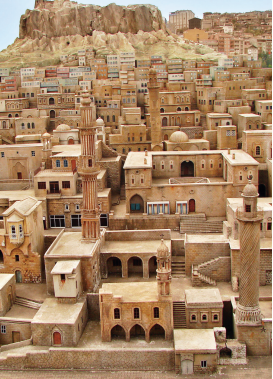 Situated in south-eastern Anatolia, Mardin stands out amongst the most pleasant urban communities in Turkey. The entire city has received UNESCO World Heritage Site recognition and is noteworthy especially at the sunset for its various baked brown coloured structures, cascading down the slope.

Mardin is home to fantastic Syrian cooking and astonishing historic Arab architecture. A fortress lies at the highest point of the slope. It is an old stronghold which was transformed into a military zone. In spite of the fortification being unavailable to vacationers, despite everything it gives the city a striking, unique feel. Mardin is additionally home to a few incredible mosques and temples. Among them, the Great Mosque which was developed in the twelfth century, whose transcending minaret takes off over the city’s winding lanes, and the Deyruz-Zafaran Monastery, one of the most established monasteries on the planet, is worth visiting.

Murat Özbilgi, a blogger (Gezimanya.com) and traveller who is well acquainted with Indian travellers said, “As the history, local ethnicities and cultural variety of Mardin is concerned, Mardin may be one of the most colourful pictures that Mother Anatolia has ever painted. From Turkish to Armenian, Assyrian to Kurdish and Arabic, this marvellous city has never been short of cultural colours. Yet, just like all great colourful art is painted on a single colour canvas, this great picture called Mardin is painted on a single dark brown colour. It’s inspiring as well as impressive.” 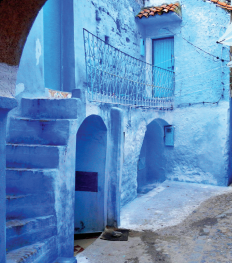 The bustling city of Marrakech in Morocco with its medinas remains an overwhelming trip for any keen traveller looking to soak in the beauty of blue. Neela Majumdar, a traveller from Kolkata recently visited the city and shared her experience with India Outbound. She says, “I shall always associate Marrakesh with blue. The blue doors, blue tiles and even large terracotta pots painted a deep intense blue, against the walls of the city which are of red sandstone.”

Speaking about the history of this Moroccan city, Majumdar adds, “French artist Jacques Majorelle trademarked the Majorelle blue, a rich cobalt for the walls of his studio in the Majorelle botanical gardens, a masterpiece later owned by Yves Saint Laurent and which houses a museum of Islamic art especially the Berber collection of lovely red hand-woven carpets, costumes and jewellery.” To capture real beauty of blue in a city, Majumdar suggests Chefchaouen as she concludes, “The actual blue city in Morocco is Chefchaouen where even the walls of the city have a blue hue.” 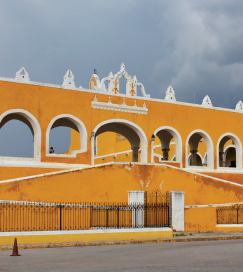 Often known as Mexico’s Magic Town, the cultural significance of this yellow city in South America is attached to the golden yellow hue of the central church than anything else. Pueblos Magicos, as the commoners call their city, all houses, shops and churches around Izamal are in the shade of the Monastery Basilica of San Antonio de Padua. The city is also called the Yellow City and is popularly known as La Ciudad Armarillo.

During the Mayan civilisation, Izamal occupied a crucial spiritual and religious place. Today also, a traveller’s most coveted place would be the remains of the four extensive pyramids overlooking the city. The Kinich Kak Mo Pyramid is one of those four that was built amid the early-Classic time. This pyramid traverses a whole piece and offers wonderful visuals of Izamal and the encompassing Yucatán district. After the entry of the Spanish, the Mayan pyramids and sanctuaries were obliterated. Frontier structures and holy places were worked in their place, frequently utilising the first Mayan stones and building materials. Hence, the colour yellow continues to dominate Izamal. 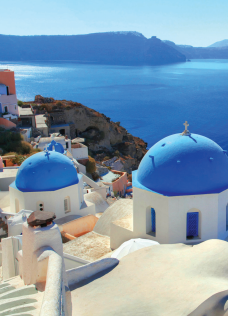 A semicircular island in Greece that lies in a zone of now dormant volcanoes, was formed because of one such volcano erupting over 4,000 years ago and is one of the most famous Greek islands. Santorini is predominantly painted in white and occasional blue giving it a dreamlike landscape. Situated in the Aegean Sea, the first thing that catches your attention is the whitewashed houses accompanied by blue doors and windows. While some find it representation of the Greek national flag, colloquial history says that the whitewashing was rather used as a disinfectant material to limit the contagion of a cholera epidemic that had struck the island centuries ago. However, today, mix of these simple pastels of bright white walls with blue doors and windows serves a very different purpose of pulling in tourists and filmmakers from around the world. Tulika Guha, an avid traveller, artist and owner of Paintaholics, who was recently basking in the beauty of Santorini says, “There’s no denying the uniqueness of this destination and thus the most popular island of Greece. Picturesque alleys, black sand beaches, oh so delicious Greek yogurt, whitewashed houses with blue domes, romantic cafés, vibrant nightlife and iconic sunset of Oia village makes Santorini a precious gem by the Aegean Sea. I fell in love so deeply with this crescent shaped island that the toughest part of my vacation was to return.”